I have been performing (dance, theater, music) for most of my life and always felt like I couldn’t walk away from the entertainment industry altogether because it was part of me for so long. Then one day, about six months ago, I woke up and decided that I didn’t want to be part of it anymore. Just like that!

I had an opportunity to shift focus in my career and it was one of those moments when everything clicks. I wasn’t even looking for a job, but it appeared before me at just the right moment. Now I am in a position to help others who are struggling so that they can thrive in their own careers. I am no longer the one in desperate need. That feels really good.

It was as simple as a mindset shift. I had been thinking for several months that I was ready for a change to full time (after working part time, raising my kids and finishing grad school), but wasn’t certain what that would entail. On the advice of a friend, I made a list of all of the attributes I wanted in a job. I immediately noticed that “theater” was nowhere to be found on that list. It was time to let go, I knew that for sure. While it was scary to think about venturing away from the familiar, I felt ready for a big change.

The next morning I woke up and felt a calm come over me. With the adage “dress for the job you want” ringing in my ears, I put on a new blazer and went to the office. Not two hours later, the head of a local non-profit came in to contribute her expertise to a project we were doing. As she left, she mentioned that she was looking for someone to fill a position in her office. I looked it up thinking I might be able to help connect someone to the job. As soon as I read it, I knew that someone was me. From there, it all went like butter and I was in the new position within a month.

I am a firm believer in the ability to create my own experience. This was yet another example of how that has played out. Making that change was a huge stress release, and after years and years of struggle, my blinders are off. I see all kinds of new possibilities. I am growing and learning everyday. I know that I am on the right path. Now that I have this new confidence and ease, the sky is the limit and am overjoyed to be free of the weight. Onward and upward!

Goals v. Resolutions: How You Can Kick Ass in 2020 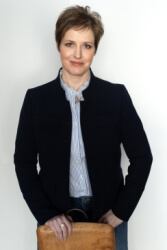 You CAN change the world through your business.

GET YOUR FREE MONTHLY TIPS!